The PCF takes the input from RADCOM’s NWDAF solution to assign more resources or steer traffic policies, which helps the operator run their network slices more dynamically, while the NSSF takes the load level information provided by RADCOM’s NWDAF for slice selection. The user plane and control plane transactions are associated with the SST, and SD and KPIs are aggregated by the SST and SD (exposed via the 3GPP standard interfaces).

As well as serving as an NWDAF, RADCOM ACE also offers an efficient and cost-effective, containerized service assurance solution. This provides end-to-end network troubleshooting, as well as complete service and customer experience visibility— empowering the operator with an enhanced, more agile NWDAF solution. 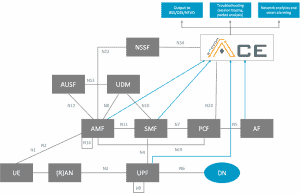 It is offering network analysis and alarming, which is interoperable with the troubleshooting applications, allowing for a seamless drill down from one application to another—for example, performing a drill from a KPI Reporting into session information and from there into packet information.

This can also work in reverse by way of a “drill up” from a specific example to a broader view of the associated data, e.g., starting from a packet and viewing the entire session, which includes that particular packet.

RADCOM’s NWDAF with AI/ML capabilities continually collects network data from the NFs and provides real-time analytics back to the NFs and the operator’s BSS/OSS systems, delivering continuous network analysis to help proactively manage the 5G network, essential for advanced 5G use cases.

Network slices will be monitored automatically for performance and resources adjusted to make sure the agreed SLA is delivered. AI and ML will be continually utilized to assist zero-touch slice management by forecasting resource utilization trends and proactively improving/configuring the network resources.

Advanced ML algorithms will utilize the information collected by the NWDAF for tasks such as mobility prediction and optimization, anomaly detection, predictive QoS, and data correlation.

Some of the use cases for future 5G standard releases and enhanced network automation using ML are: